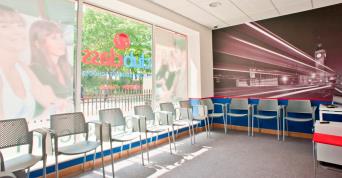 Clubclass London occupies the ground floor of a modern building on Theobald's Road, in the heart of fashionable Bloomsbury. Holborn (5 minutes), Chancery Lane (8 minutes) and Russell Square (10 minutes) underground stations are all within easy walking distance of the school. Piccadilly and Central line underground services, as well as the very frequent buses that pass in front of the school, make the rest of Central London very easily accessible.

On Theobald's Road, students studying at Clubclass London have access to a number of cafes, restaurants, shops, a library and a health and fitness club. Landmarks such as Covent Garden, Leicester Square, Piccadilly Circus and Oxford Street which boast an infinite number of shops and amenities are also only a short walk away. The theatres and nightclubs of Soho and London's West End as well as a number of museums, including the world famous British Museum, are all within easy reach.

Clubclass Language Schools are fully accredited by and are members of the leading accreditation bodies and authorities in the markets in which they operate, in the UK this is The British Council and English UK.

To maintain these accreditations, the schools must comply with strict regulations relating to school premises and facilities, teacher qualifications, teaching quality, administration and welfare.